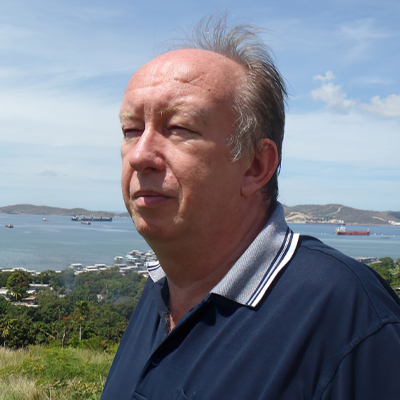 Maurice Brownjohn OBE was born in England on September 4, 1959. Growing up in the UK inshore fishing industry. With an Honours degree in fishery science, he moved to PNG in 1981, to work in community fisheries development.
In 1987, Brownjohn moved back to the private sector establishing a major net rigging company and a leading longline operation in PNG. He has established and chaired the PNG Fishing Industry Association in 1991, he was deputy chair of PITIA, the regional tuna industry body, and a founding director of the NFA in 1995. Brownjohn has continued the high profile roll in the sector in PNG and globally.
As a citizen of PNG since 1989, he was awarded an OBE for services to the PNG fishing industry in HM the Queen’s New Years honors list in 1998.
Since January 2010, Brownjohn has taken on the broader regional role as the Commercial Manager at the eight island governments under the Parties of the Nauru Agreement (PNA) Office, based in Majuro.
His responsibilities include advising the region on commercial issues and investment opportunities in tuna, MSC certification, and Pacifical C.V marketing sustainable MSC tuna from the PNA people. Also, he is managing the VDS with the company FIMS Inc and observer programs under the POA contract.
Brownjohn is well known and has taken a high profile role in Pacific issues for the last four decades. He is at the forefront of fishery development in PNG and the PNA region.
Note: Parties to Nauru Agreement [PNA] are: Federated States of Micronesia, Kiribati, Marshall Islands, Nauru, Palau, Papua New Guinea, Solomon Islands, and Tuvalu, with Tokelau working in cooperation with PNA.

FAD Bans, Management, Tracking and Purse Seining in the Future

If we look at the global experience of tuna RFMOs – IATTC, IOTC, and ICCAT – each fishery is primarily high seas based and highly FAD-dependent. Their RFMOs are limited by consensus and no one wants to accept the economic costs of conservation. Thus, the “tragedy of the commons” with at least two out of four tropical tuna stocks in each RFMO is a problem. It is typically the adjacent coastal economies that suffer as most industrialized fleets can move on.
FAD dependency changes the dynamics of a fishery and increases juvenile mortality of yellowfin, bigeye, and non-target species. In this EPO region, for example, skipjack catch has increased over what was traditionally a targeted mature yellowfin fishery. Besides environmental impacts, this also changes the local supply and demand, increasingly influenced by customer demands for sustainability.
In our region, WCPFC, we have maintained in zone FAD closures, limited FAD effort to <50 percent, managed total fishing effort in days [VDS], introduced closed fishing areas, offered MSC as an economic incentive for Free school, etc. WE are stepping up FAD registration, tracking and management, and mitigating the environmental impacts of FADs on reefslooks etc. It is critical that the ecosystem overall remains sustainable.
Today, PNA has the healthiest tuna stocks in the world. BUT note, it is the PNA nations that carry 100 percent of this disproportionate burden with 70 percent of the catch in their EEZs.
Perhaps it is time that the global community looks to share this sustainability burden and close high seas areas.